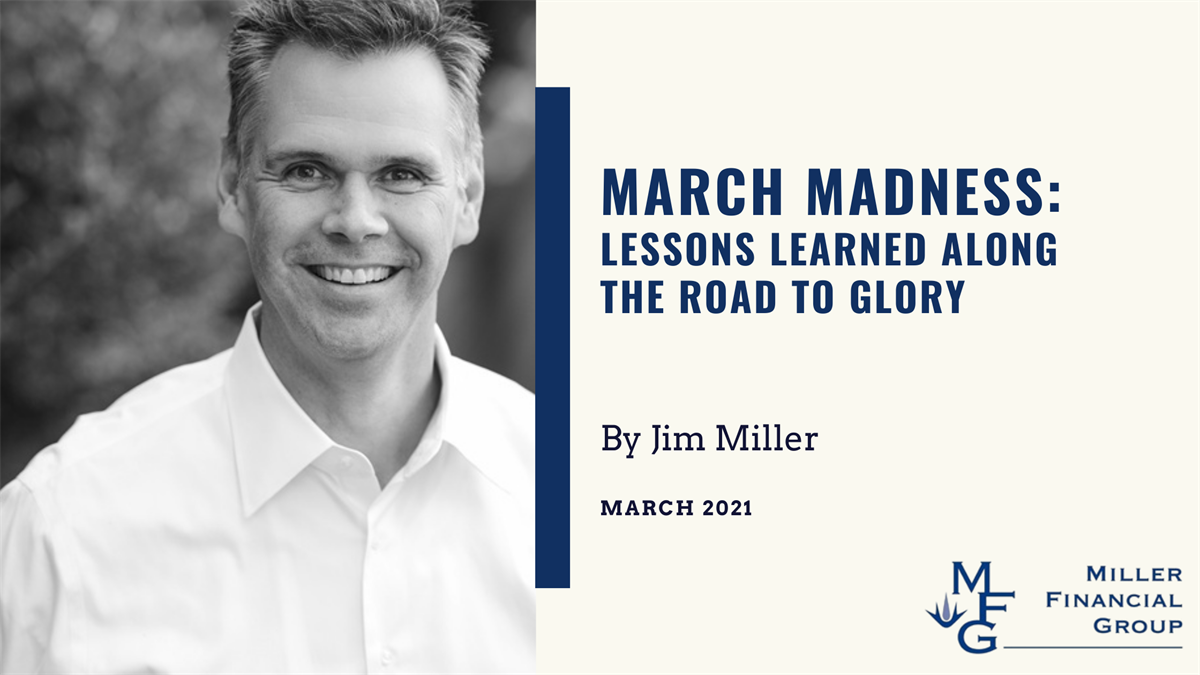 March Madness: Lessons Learned Along the Road to Glory

As the final week of March Madness is coming to a close, I can't help but ponder upon my own experiences as a player in this beloved tournament. The NCAA Men's Basketball Championship tournament has struck hope in fans all over the country for a single month out of every year (except last year of course) for nearly a century. Whether your alma mater is making a run, you've got money riding on the outcome, or you like to root for the underdog, the nation as a whole is sitting at the edge of their seats craving the pure entertainment that these 18-22-year-old kids are providing. Yet, every year after the final buzzer rings, we quickly forget and move on back to our busy lives. What we don't realize though, is the lasting life lessons that these kids are encountering. So before we indulge in this final week of men's college basketball, I would like for you to join me as I reflect on the growth that March Madness provided to me back in my years as a student-athlete.

Never let the Moment get too Big

The day is March 14 of 1982 at the Market Square Arena in Indianapolis, Indiana. The highly touted Virginia Cavaliers are taking on the University of Tennessee Volunteers. I couldn't have cared any less about who we were playing. With this being my first game in the NCAA Tournament, the only thing running through my mind was the 15,000 seats that were going to be filled with screaming fans the whole game. There is no bigger moment for an 18-year-old kid from a small town in West Virginia. The only thing I knew to do was to take deep breaths and concentrate on my assignment.

Often we face colossal moments in our life that seem impossible to tackle. If we let our emotions best us, that can lead to failure. Moreover, the way we respond to these moments is oftentimes how we are defined by those around us. Experiencing 3 years of the tournament has helped guide, shape, and prepare me for these very moments, now I hope to pass this knowledge on to you.

When the situation begins to feel overwhelming, take a step back, remember that you are here for a reason. You wouldn't be in the position if you weren't qualified to overcome it. Encounter the task-at-hand not as one large step, but many small steps. Yes, we should never lose sight of the end goal, but achieving one small step at a time can relieve the pressure of the overarching circumstance. As Roy McAvoy put it so plainly, "when a defining moment comes along, you either define the moment or the moment will define you."

The March Madness tournament's design is humbling in the fact that you never know which game will be your last. Whether it's a 1-seed 2018 UVA Cavs losing to a 16-seed UMBC Retrievers in the 1st round, or it's a 2019 UVA team that wins it all, we truly never know what's in store for us. My particular experience would be my sophomore season in '83 when we were a 1-seed in the tournament and expected to make a run to the Final Four with many predicting us hoisting the championship trophy. Cue NC State, the team that snuck up on us in the ACC tournament which gave them a birth in the NCAA tournament.

We fought hard, but at the end of the day, it was NC State's moment. Just like that, the chances of holding that trophy were taken away. It was devastating, but it taught me that nothing is ever given in life. We have to embrace the present to cherish the future.

The same can be said about our life events. The one who is always worried about their future is the one that never realizes where they are in the present. We never know when the moment is ours to take until we are in it, but if we are troubled about our future we are blind to the opportunities in our present.

1983 was our year. It was Ralph's senior season, and we were determined to get him that championship. We knew we were the best team in the league. The championship was ours to lose. No one could beat us and if they did in the regular season, it was just a fluke. The loss in the ACC championship was to a lesser NC State team. There was nothing to worry about. They probably weren't even going to make it to see us again anyways, and if they did we were going to roll over them as we should have before. When it was time to start the tournament there was no doubt who was coming out on top, the UVA Cavaliers.

The rest is written in the books. We would go on to lose to NC State again in the Regional Finals crushing our dreams of getting Ralph to the championship. The answer is simple; we overlooked a team that we should have beaten. Nothing is more humbling than having to watch a team you know you should have beat go on to win a championship instead of you. That's life though, the moment we think we have it all we take a blow to the gut that knocks us down. There is something to be said about having the humility to see each opponent for what they are and not how they are perceived to be.

I attest much of what we learned about humility in '83 to our Final Four run in '84. The moment we begin to overlook any situation is the beginning of our detriment. Knowing your talents can be very helpful in life, but assuming that you are better than another gives you a false sense of reality. These are just some of the things that I have taken away from those moments to help me stay humble in my everyday walk.

These student-athletes have been gifted with athletic abilities that have helped provide them with these opportunities that brought them to the big stage, but at the end of the day, they are human just as you and me. We can take these lessons that these kids are experiencing and practice them in our everyday lives as well. So, as you sit at your couch with the spread of food in front of you, waiting for the magic to ensue, I urge you to consider these lessons I have brought to you today.

This material is for general information only and is not intended to provide specific advice or recommendations for any individual.