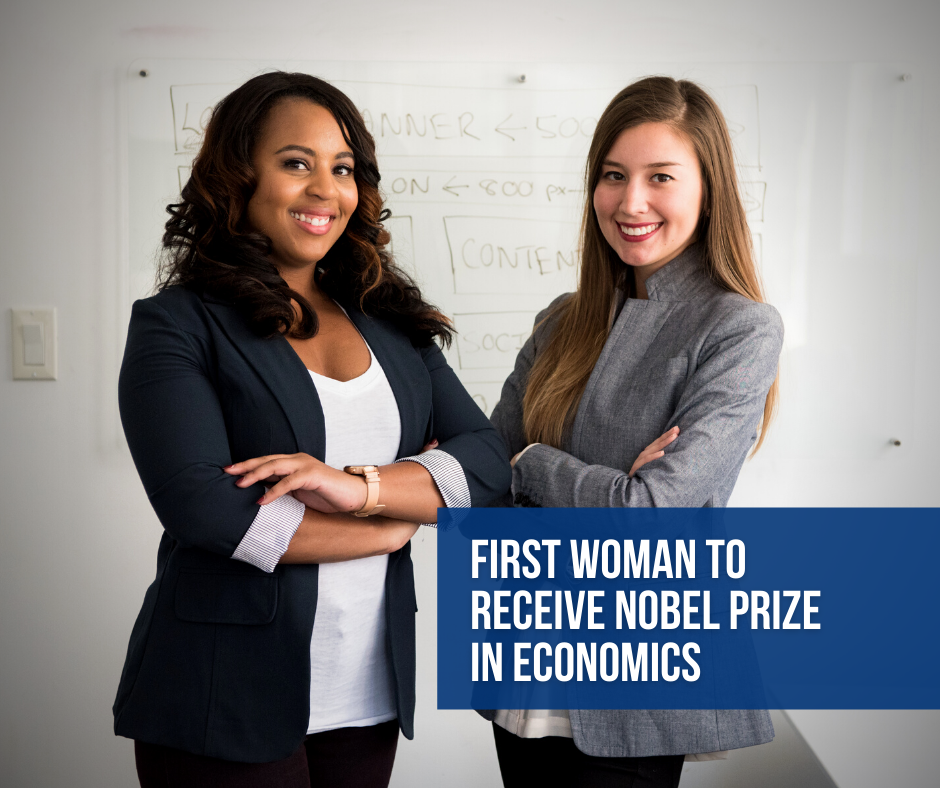 Women’s History Month traces its origins to 1981 when Congress passed a joint resolution designating the week beginning March 7, 1982 as “Women’s History Week” and requesting that President Reagan issue a proclamation “calling upon the people of the United States to observe such week with appropriate ceremonies and activities.”

Elinor Ostrom – A Woman of Firsts

Elinor Ostrom is known for being the first woman to ever receive a Nobel Prize in economics. A political economist, in 2009 Ostrom received a Nobel Prize in Economic Sciences for debunking the long-held belief that natural resources, when used collectively, would eventually be destroyed due to the self-interest of each (selfish) individual. Through her research, she proved that when communities shared natural resources, they developed rules for caring for and nurturing those resources, which in turn promoted economic sustainability. In her book Governing the Commons, she demonstrated that groups can effectively manage natural resources without resorting to government control or private ownership.

“Ostrom was born on 7th August, 1933, in Los Angeles, California. She was the only child in her family, and her parents were not particularly well off. Her family’s financial predicament was further crippled when her father left her mother. Ostrom however, did manage to pursue her education as she came through from the Beverly Hills High School in 1951. This was soon followed by a B.A. with honors in Political Science from the University of California, Los Angeles (UCLA). Ostrom continued her association with the institution as she went on to receive both M.A. and a PhD in Political Science in the years 1962 and 1965 respectively. In between these years, she married Vincent Ostrom, an American political scientist.

Ostrom continued her educational endeavors after completing her studies, this time in a teaching capacity. She joined the faculty of the Indiana University, where she ended up landing the honor of Distinguished Professor and was named the Arthur F. Bentley Professor of Political Science. During her time at Indiana University, Ostrom teamed up with her husband to start the Workshop in Political Theory and Policy Analysis, whereby she investigated the collective use of common pool resources (CPR). Her outlook on public policy was dissimilar to the mainstream, and thus came to be recognized as a different school of thought in public choice theory.

Elinor Ostrom also served on the faculty of Arizona State University. Her impressive work there saw her receive the title of Research Professor and the Founding Director of the Center for the Study of Institutional Diversity. Furthermore, Ostrom worked on a USAID funded project termed Sustainable Agriculture and Natural Resource Management Collaborative Research Support Program, where she assumed the role of lead researcher. In 2008, she was handed a consultancy role by the popular journal, Transnational Corporations Review.

Ostrom has also managed to accumulate considerable success as a writer by publishing books covering a wide variety of topics on organizational theory, political science, and public administration. In 1990, she published Governing the Commons, which illuminated readers on how economic principles and frameworks could best achieve social organization. It also went on to suggest that via user associations, public goods could be utilized more efficiently.

Ostrom was particularly known for her unorthodox methods to research. Unlike other professionals in her field who tested a hypothesis based on a reality assumption, Ostrom preferred to make use of real life situations. She collected data via field research to gain comprehensive knowledge of the situation and subsequently delved into its further study to come up with her own discernments. She particularly investigated, especially in her early years as a researcher, how the production of public goods and services is affected by the preferences and choices of the actual public itself.

In 2009, Ostrom reached the pinnacle of her professional career as she was honored with Nobel Memorial Prize in Economic Sciences, becoming the first female recipient of the award in the process. The award acknowledged her study and scrutiny of economic governance when it came to the public, which asserted that individuals could successfully manage their own property without interference by the government.

Ostrom passed away on 12th June, 2012, after a struggling battle with pancreatic cancer. Amongst her many other lifetime accomplishments were the Johan Skytte Prize in Political Science in 1999, the John J. Carty Award from the National Academy of Sciences in 2004, and the James Madison Award by the American Political Science Association in 2005.”

Content in this material is for educational and general information only.

All information is believed to be from reliable sources; however LPL Financial makes no representation as to its completeness or accuracy.

This article was prepared by FMeX.